A unilateral cleft lip results from failure of the union of the maxillary and median nasal processes, thus creating a split or cleft in the lip on either the left or right side. It may be just a notching of the lip or extend completely through the lip into the nose and palate.

A number of procedures have been described to repair the unilateral cleft lip. The procedure used at our Center is the Millard rotation advancement technique. The procedure is designed to reconstruct the lip, muscle, oral mucosa, and to reposition the nose. It is performed under general anesthesia with surgery lasting 1 1/2 – 2 hours and a hospital stay of 1-2 days. Special considerations are necessary for feeding and positioning the infant postoperatively.

The baby’s elbows are restrained from bending to prevent him/her from disrupting the nose or lip. Positioning the child in an infant seat keeps him/her from rolling over and injuring the lip or nose. Pacifiers and nipples are not allowed. The baby is fed with a special syringe feeder with a soft tube. It takes approximately 3 weeks for the wound to gain enough strength to discontinue the above precautions. The lip scar is initially red and swollen, but it begins to mature and improve in appearance in six-twelve months. 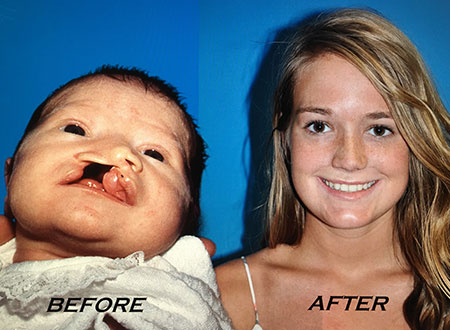