Clefts of the Lip and Palate 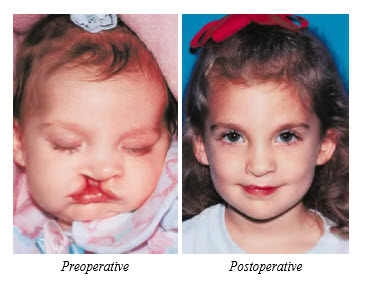 Each year approximately 227,500 or 7 percent of births in the United States are affected by birth defects of the head and face. The most common of these are clefts of the lip and palate which occur once in every 700 births. Clefts occur in infants of all races with a 2:1 male to female ratio. The incidence of clefts is highest in the Asian population and lowest in African Americans. Of all orofacial clefts, 21 percent present as cleft lip only (unilateral and bilateral), 46 percent present as cleft lip and palate, while the remaining 33 percent have cleft palate alone.

What is a cleft?

The exact cause of lip and palatal clefting is not known, but most experts feel that it is due to both genetic and environmental factors. Clefts are associated with abnormalities in the genes which may be a result of inheritance or from a spontaneous mutation during fetal development. We recommend genetics counseling to discuss causes of the cleft and the recurrence risk factors.

Children born with clefts should be carefully assessed by the craniofacial team in order to detect potentially serious abnormalities that can be associated with clefting. There are over 150 syndromes that include cleft lip or palate in their differential diagnosis. Generally, clefting is the only congenital abnormality that the child has, but nearly 15 percent of all cleft lip or palate patients present clinically with multiple problems.

The team concept allows a systematic, comprehensive treatment plan to be developed and allows the team members to work together to identify problems before they become significant. The most common specialties involved in the care of a child with a cleft are: plastic surgery, otolaryngology, dentistry, audiology, speech pathology, genetics and pediatrics. Once a complete assessment of the child with the cleft has been performed, a plan for treatment can be outlined.