Premature closure of the sagittal suture, the longitudinal suture on the top of the head, stops growth laterally producing a narrow head. There is a compensatory growth in the anteroposterior direction with elongation of the skull and a bulging of the front and back of the head. This particular deformity is called scaphocephaly due to the skull’s boat shaped appearance. Synostosis of the sagittal suture is the most frequent type of single suture craniosynostosis. It makes up 50-60% of all patients within North America with craniosynostosis. The particular infants with sagittal synostosis characteristically have normal intelligence.

In sagittal synostosis or scaphocephaly we most frequently perform total skull reshaping. In this type of synostosis the forehead and back of the skull are usually bulging, overprojected, and the width of the skull too narrow. The front, back and lateral bone plates are removed and then reshaped to a more normal contour. The forehead is tilted back (as well as the occiput) and the entire anteroposterior dimension of the skull is shortened. The reshaped bones are secured in position with resorbable suture and a few small wires. Certain gaps between the bones are left unsecured to avoid restriction of growth. 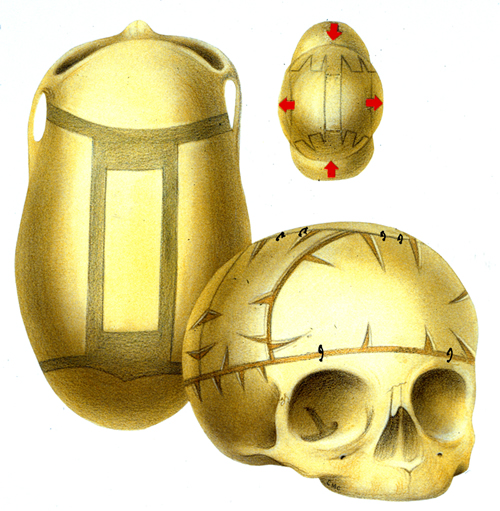 The dura, or outer covering of the brain, may be plicated in the frontal region to decrease the prominence. Barrel stave cuts are made in the lateral bone at the base of the skull to allow more projection of the skull laterally, increasing the transverse width. This type of procedure gives a more definitive and immediate improvement in skull shape.