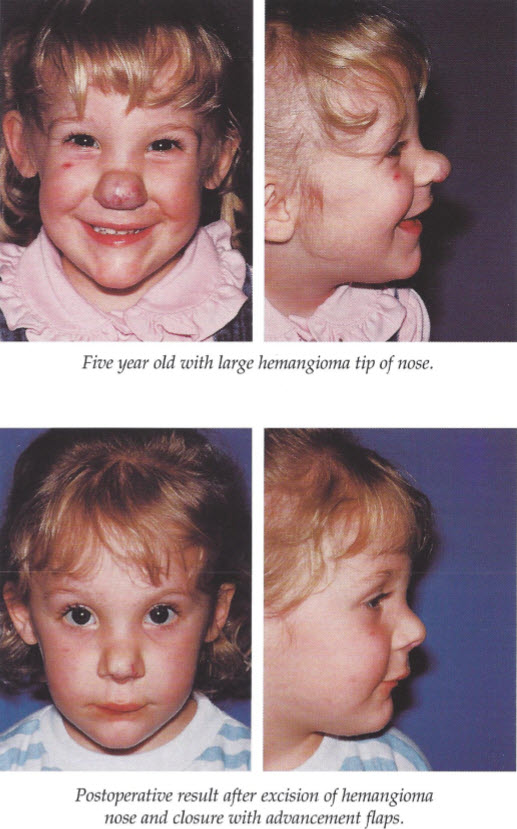 There has been a great deal of confusion in the terms used to describe different types of vascular lesions or birthmarks. In the past, the word hemangioma has been used to describe a variety of lesions with differing origins and characteristics. A new classification system was published in 1982 by Mulliken and Glowacki, designed to simplify the nomenclature based on cellular biology with diagnostic applicability to the natural progression of these birthmarks. In this system, vascular birthmarks are divided into two major categories: hemangiomas and malformations. Hemangiomas are the vascular tumors that demonstrate rapid cell turnover or proliferation. Malformations are all other vascular tumors which have a normal endothelial cell turnover or cycle. This article discusses the diagnosis, clinical course and treatment of hemangiomas. 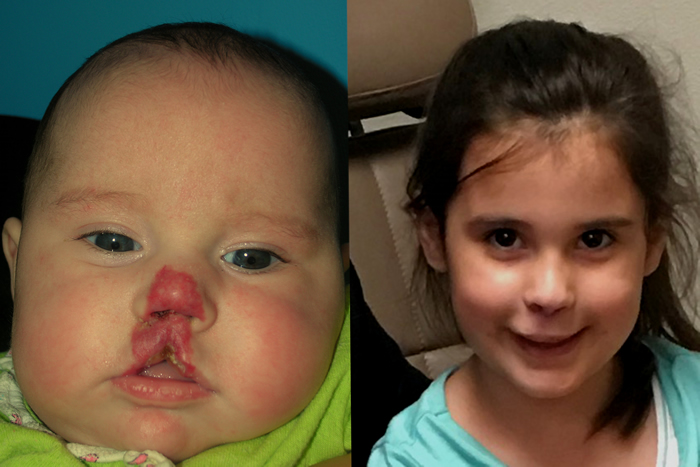 Hemangiomas are the most common tumors found in infants. Of all newborns, approximately 1% to 3% have hemangiomas. Most hemangiomas are not noted at birth but do appear several weeks later with an incidence of 10% to 12% by 1 year of age. Females are more commonly affected than males by a ratio of 3 to 1. Of the infants diagnosed with a hemangioma 15% to 20% will have multiple lesions. The first sign of a hemangioma is an erythematous patch or small telangiectasia surrounded by a pale halo. The most common area on the body appears to be the head and neck region.

Hemangiomas characteristically go through stages of rapid proliferation followed by spontaneous slow involution. These may begin as a “herald spot”, which is a small, well demarcated pale patch, an erythematous macular patch, or a small area of telangiectasia sur­ rounded by a pale halo. Hemangiomas usually go through their growth phase the first 8 months of life. The exact time of involution is variable but may start by 18 months of age. Large series of hemangiomas that have been reported show that by age 5, 50% have totally resolved and by age 7, 75% to 90% have disappeared. The size nor the site of the hemangioma has any effect on the time or degree of involution. The lesions that have the best results are ones that have significantly involuted by the age of 5. One of the first signs of involution is the changing of the bright red color to a darker red. The may be followed by a gray appearance to the sur­ face with small white spots appearing. The skin becomes less tense with wrinkling as the lesion involutes.

The majority of hemangiomas will involute and should be permitted to regress spontaneously. However, even with total involution of the hemangioma, return of the skin to normal is rare. Some hemangiomas can cause problems with function and should then be evaluated for active or early treatment.

A lesion that results in blockage of the airway, visual fields, or ear canal should receive immediate treatment. Other problems such as massive growth of a facial lesion, large ulceration and bleeding, or multiple hemangiomas causing congestive heart failure should be considered for treatment. The most common forms of treatment involves steroid therapy, oral propranolol or operative excision. Reported studies have shown that oral steroids may accelerate the start of involution in hemangiomas that are rapidly expanding. Good to excellent results have been achieved by authors in 50% to 90% with oral steroids. Infants less than 6 months of age tend to be more responsive than older patients. When we feel treatment of a hemangioma is indicated, we give an oral dose of Prednisone at 3-5 mg/kg/1 day for 6-8 weeks. A response should be noted during this time period. In the past 5-7 years oral propranolol has gained popularity in the successful treatment of capillary hemangiomas as well. In our experience, complications from such treatment are rare.

Operative treatment is usually limited to contouring of the skin after the lesion has involuted. The psychological impact of a hemangioma on the face may become a factor in the child starting school. We therefore feel that in certain patients, excision of the hemangioma may be indicated or beneficial. Hemangiomas of the tip of the nose may be such lesions. Larger lesions that have not involuted by the time the child starts school should also be considered for excision. The type and extent of excision is based on judgment and experience with careful placement of scars and consideration of long term aesthetic results.