The maxilla forms the largest component of the middle third of the facial skeleton. The maxilla is a key bone in the midface that is closely associated with adjacent bones providing structural support between the cranial base and the occlusal plane. Fractures of the maxilla occur less frequently than those of the mandible or nose due to the strong structural support of this bone. The midface consists of alternating thick and thin sections of bone that are capable of resisting significant force. This structurally strong bone provides protection for the globes and brain, projection of the midface, and support for occlusion. Reestablishing continuity of these buttresses is the foundation on which maxillary fracture treatment is based.

Renee LeFort (1901) provided the earliest classification system of maxillary fractures. His model described great lines of weakness in the face using low-velocity impact forces directed against cadaver skulls. Adiscussion of fractures of the maxilla would not be complete without a description of LeForts work.

The Lefort I fracture, or transverse fracture, extends through the base of the maxillary sinuses above the teeth apices essentially separating the alveolar processes, palate, and pterygoid processes from the facial structures above. This transverse fracture across the entire lower maxilla separates the alveolus as a mobile unit from the rest of the midface. Fracture dislocations of segments of the alveolus may be associated with this fracture. With high-energy injuries, the palate may be split in the midline in addition to the LeFort I fracture. A pyramidal fracture of the maxilla is synonymous with a LeFort II fracture. This fracture pattern begins laterally, similar to a LeFort I, but medially diverges in a superior direction to include part of the medial orbit as well as the nose. The fracture extending across the nose may be variable, involving only the nasal cartilage or as extensive as to separate the nasofrontal suture. 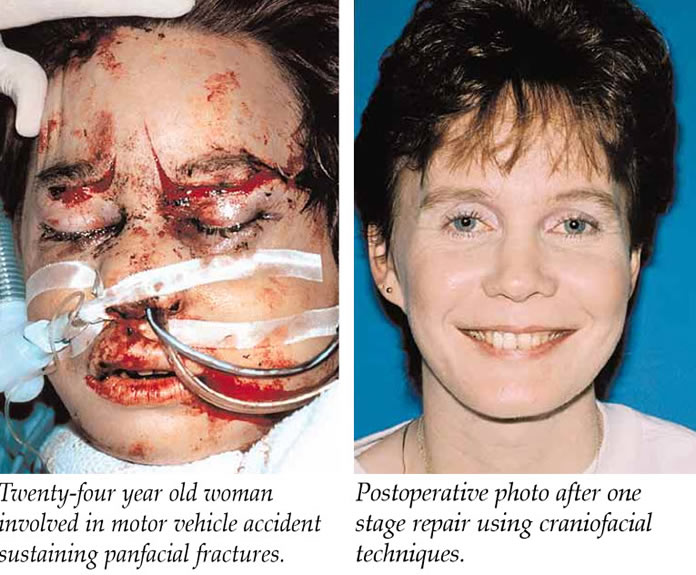 A LeFort III fracture or craniofacial dysjunction denotes a complete separation of the midface or facial bones from the cranium. This fracture transverses the zygomaticofrontal suture, continues through the floor of the orbit, and finally through the nasofrontal suture. The bones of the orbit are separated through the lateral wall, floor, and medial wall. It is unusual to have this fracture as a single segment of bone; more commonly, it comminutes with varying combinations of zygomatic, nasoethmoid, and orbital fractures. The fractures may not be symmetric on both sides and minimal mobility may be present.

Maxillary fractures today are often the result of motor vehicle accidents. These high-velocity injuries many times produce fracture patterns not classified by the standard LeFort system, but are described simply by the anatomic structure fractured and the degree of comminution present. Computerized tomographic (CT) scans and the more recent development of three dimensional reconstructions have aided greatly in the diagnosis, classification, and preoperative planning of these complex maxillary fractures. 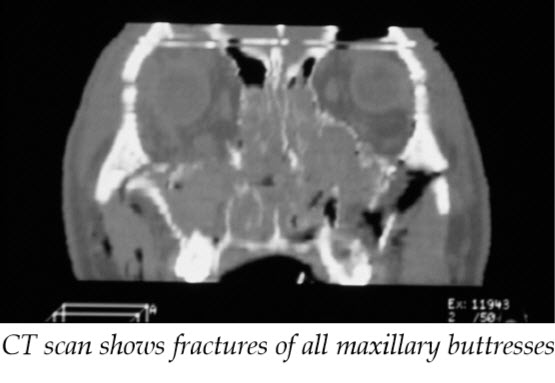 Maxillary fractures are treated by reduction and immobilization. Establishment of preinjury occlusion and midface buttress alignment provides the foundation for this treatment. The goals of treatment of LeFort fractures are to reestablish preinjury occlusion with normal height and projection of the face. To accomplish this, the structural buttress of the maxilla must be aligned and stabilized to provide the necessary support and contour to the midface. The proper occlusal relationship between the dental arches is established with intermaxillary fixation (IMF), or more appropriately termed maxillomandibular fixation. Early placement of the patient in IMF can eliminate some of the secondary deformities caused by LeFort fractures. IMF is established by securing arch bars to the upper and lower dental arches with individual wire ligatures around the teeth. The appropriate occlusion is then determined by wear facets, and the maxillary and mandibular arch bar are secured together. This is one of the simplest and most effective forms of treatment. However, IMF is more commonly used in conjunction with other immobilization and stabilization techniques.

Recent advances in the treatment of maxillary fractures have been the use of extended open reduction techniques with rigid plate and screw fixation of the facial buttresses. Bone grafts have been used to replace missing or comminuted bone with early treatment of these injuries. This more aggressive surgical approach has dramatically improved the aesthetic results now obtainable with fewer secondary deformities. 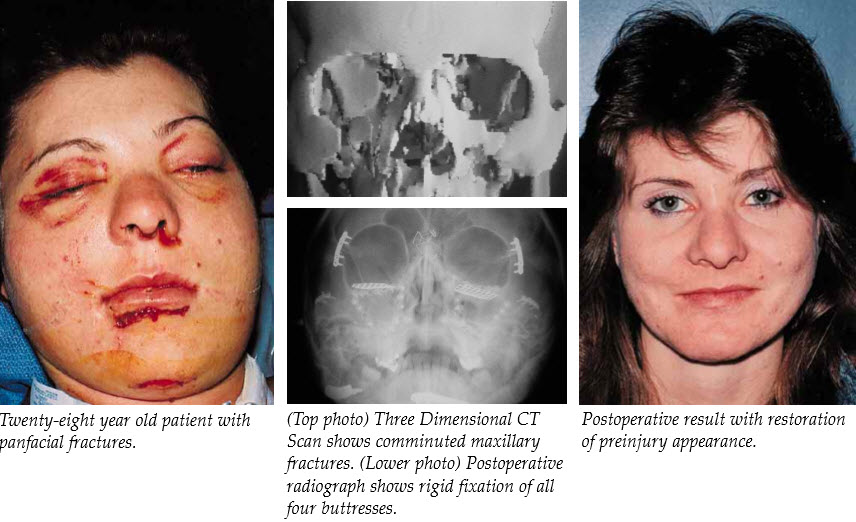